REVEALED: Most HATED Chores in UK Households – Do YOU Agree?

After a long day at work, the benefits of washing the dishes or taking out the bin seems to diminish quite rapidly. Let’s face it, not many household chores are glamorous. In fact, they can be a bit disgusting.

Is there anything worse than accidentally touching the remnants of rejected ‘plate scraps’ when you’re washing the dishes? Well, the removal of matted hair from your bath plug might top it. Or perhaps that horrifying moment when you find a festering half-eaten tin of baked beans lurking at the back of your fridge. Yeah admit it, your fridge isn’t pristine.

We wanted to find out which household chores you just can’t stand doing.

Our survey revealed that we just HATE cleaning our oven. 34% of us admitted that we are likely to neglect the cleanliness of our oven and groan in despair when we have to crack open the Oven Pride. This particular chore was the clear front-runner for the most hated title. Ironing took second place with 15% of the vote. If you have to mentally prepare yourself before you tackle your tower of ironing, you’re not alone. Cleaning the oven and ironing are deemed to be worse than cleaning the toilet- which by the way, is the third most hated chore. 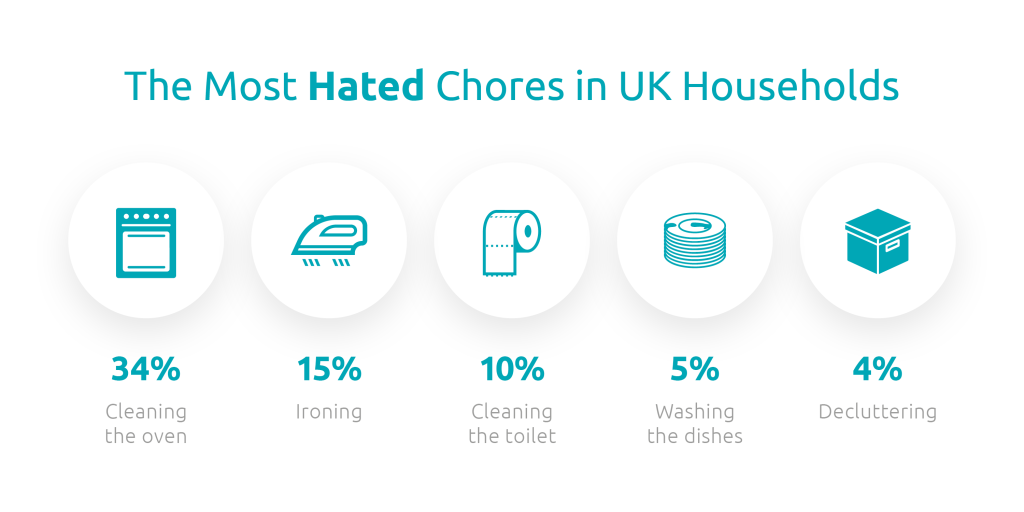 We also asked survey participants to name the household chore that they like doing the most. It goes without saying that ‘like’ is a strong choice of words where household chores are concerned. Really, we wanted to know which chore you don’t mind doing as much.

Our survey revealed that we are all a dab-hand in the kitchen, with 21% of us calling dibs on cooking meals. We can see why cooking up a storm in the kitchen is a preferred chore; for some, it’s actually a hobby. We’re not shy in guessing that the dirty dishes are left for later though!

12% of us love a thorough declutter. There is something quite satisfying about waving goodbye to old rubbish. After decluttering, hoovering is third on the most liked chores list. 11% say that they don’t really mind pushing around the vacuum cleaner.

A woman’s place is no longer at home tidying up after her family. To some extent, our survey supported this view. We asked participants to go through a list of household chores and state whether they considered it to be a job for a female, male or for either. In most cases, the majority stated that chores shouldn’t be assigned to a particular gender.

Tending to household pets, washing the dishes and cooking meals are least associated with a particular gender.

However, a substantial number of participants still associated certain jobs as being women’s work. A whopping 43% of participants think that doing the laundry is still a job for a female. 41% believe that ironing is also a female chore and further 38% when it comes to changing the bed linen.

There were only two jobs on the chores list that people stated were more ‘manly’ jobs. 40% think that men should take the bins out and 23% think that cleaning the windows should be reserved for the man of the household if there is one.

Men VS Women: Whose Job is it Anyway? 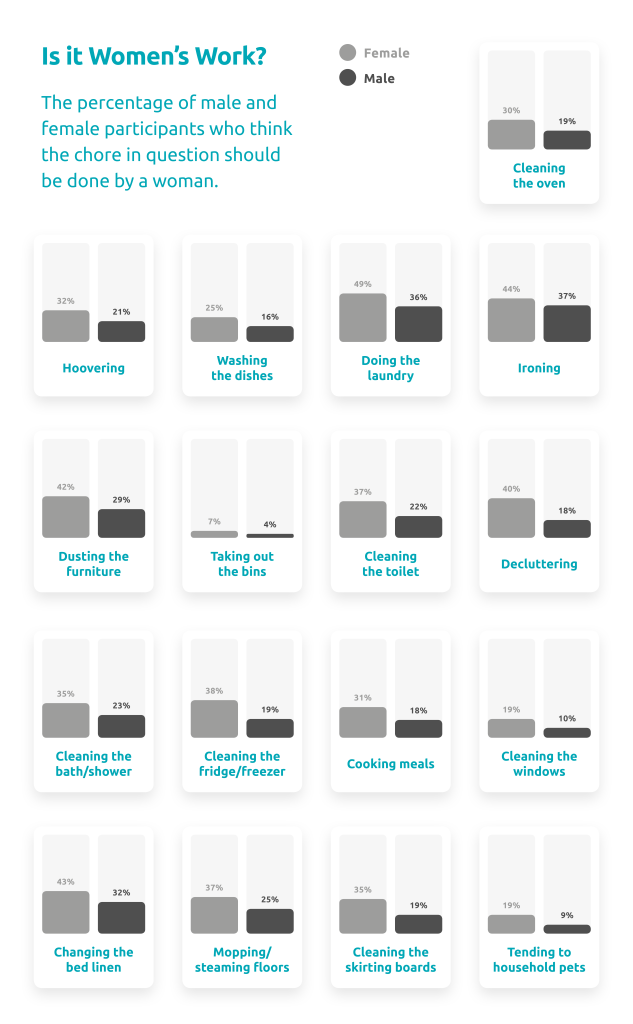 Let’s take the top 3 most disliked chores and see which were considered to be ‘women’s work’ by our participants:

As we know, the most disliked chore was cleaning the oven. Only 19% of male participants considered this disliked job to be ‘women’s work.’ Interestingly though, 30% of females felt that this was a job best left in their capable hands. When it comes to ironing, 37% of male participants believe that this is a chore mostly carried out by a woman. 44% of female participants agreed, once again suggesting that they felt they were better placed than a man to carry it out more efficiently. Cleaning the toilet is the third most hated chore according to survey results. In this instance, it seems that most male participants don’t associate this chore as being a feminine one, with just 22% classifying it as women’s work. Once again, however, a higher percentage of female participants claimed this chore as being one that’s mostly attributed to women- 37% to be exact!

Men VS Women: Who Puts the Work In?

While male participants don’t readily associate household chores as being female, they don’t spend as much time completing chores compared to females. Let’s take a look:

In an average week, men spend around 7 hours and 54 minutes doing household chores. But how much do females do? Well, in an average week women spend an extra 5 hours and 39 minutes cleaning compared to their male counterparts. That works out at an extra 32 minutes each day. It doesn’t sound much when you put it like that, but when you compare it over the course of a year it really starts to mount up. In an average year, women spend over 209 hours more than men doing household chores. Of course, it’s difficult to say why this is the case. Are women guilty of hogging household chores? Perhaps the female participants we surveyed are just too house proud? Or is it the case that men are lazy when it comes to completing jobs around the house?

What’s you’re most hated household chore? How do you divide the household chores in your home? Tweet us on @WellPolishedLTD and let us know.  Don’t forget, if cleaning becomes a bit too much of a chore, you could always hire a cleaner!