Starting a business is no easy feat wherever you are in the world. First you need the confidence to take on such a grand venture, then you need to have the right support network to offer you a hand during hard times. Then you have the real problem. Raising capital.

Some locations, though, can make it easier to start a business than others. Birmingham for example, created the City Centre Enterprise Zone which aims to create £2 billion in extra revenue for the city. From an employee point of view, cities like Bristol offer highly qualified workforces with over 45% having four NVQ qualifications or above. And from a facilities standpoint, the office space, start-up incubators and innovation centres on offer in places like Brighton rival every Silicon Valley-esque city across the world.

Most regions though have much further to go in supporting women starting a business. In our survey even the ‘best’ region in the UK only scored a 5.7 out of 10, while the average as a whole for the UK was a pitiful 5.5.

To investigate what regions across the UK can do for women, Well-Polished has commissioned a survey to find the Best and Worst regions for Women to start a business in the UK and what obstacles these business focused women often find in their way.

Use the map, tables or information to find out more below. 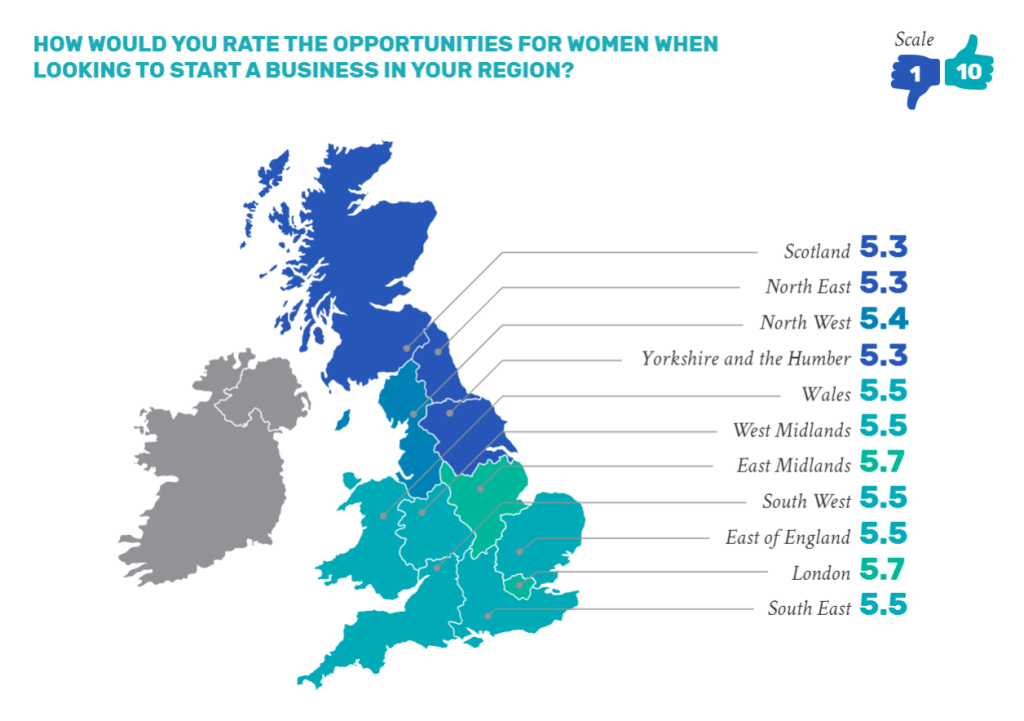 You’re best off down south…

The best region to be a budding female entrepreneur is either London or the East Midlands revealed the survey. The two regions scored an average rating of 5.7 out of 10. While yes, it is the best rating in the UK, the mediocre score neither indicates a bad or good place to be a female entrepreneur in the UK. Still, after a little research, it’s easy to see why the regions score so highly. London has been the business capital of the world for well over a decade and the Nottingham Business Community has consistently championed the Women in Business Awards across the Midlands.

So much for the Northern Powerhouse?

The worst region to be a budding female entrepreneur goes to the three Northern regions in Yorkshire, North East England and Scotland revealed the survey. Giving the three regions a 5.3 out of 10, the regions just managed to stay over the halfway score mark. Is this the result of dismal Northern investment or is there a different culture view of business and starting a business in the North?

Ask any Northerner who gets it best across England and you will no doubt get a well-meaning, but often heated, discussion on how Southerners see far more investment than the North. The sentiment is well represented in our survey once we split England into the areas of the North, the South and the Midlands. The North for example has a pitifully poor rating of 5.3, while the regions further South get a rating of 5.55 or above. Will Mr Osbourne deliver his Northern Powerhouse project? For women, the results are still yet to be seen.

With there being a clear divide between the opportunities on offer between the Northern and Southern regions of the UK, our next point of interest was to see how the scores differed between the age groups. For this we split the survey into 5 different female entrepreneur age groups ranging from 18-24 to 65+. Interestingly, apart from Scotland, all the regions scored highest among the youngest age group 18-24. We’ve all been there though haven’t we? The world is pure, honest and ready to be taken. Don’t worry though, wrinkles, bills and the daily slog seem to grind that youthful enthusiasm right out. In fact, the most pessimistic age group was the 35-44 year olds. Typically, on a UK average, this would be when you have young children to provide for and the bills that come with it. No doubt a huge obstacle for the average female entrepreneur to overcome.

While it would be impossible to run this survey across every city in the UK, we did run a series of surveys in notable cities in each of the regions of the UK. In the same form as we did in the region survey, we asked female entrepreneurs to rate the opportunities for women when looking to start a business in their city. Surprisingly it was Newcastle and Birmingham who came out on top with a 5.9, while the lowest two cities were Manchester and Sheffield scoring a rating of 4.9. See all the cities and their ratings below.

So why are women across the UK rating their opportunities of starting a business so pitifully? What obstacles do the different regions have for women to overcome? And what can we do to help others overcome these obstacles? To find out we, again, surveyed 1000 female entrepreneurs in each of the 11 regions of England, Scotland and Wales. We asked them: ‘If any, what would you consider as the biggest obstacle for you to start a business in your region?’

Fake it till you make it

“Confidence may not bring success but it gives power to face any challenge.” It’s an old saying but it rings true for today’s female entrepreneur. Without confidence in yourself and belief in your own skills, a business idea will probably just remain that, an idea. In our survey 31% of women across the UK consider their lack of confidence the biggest obstacle to starting a business. In a closer regional analysis, it was Wales who lacked confidence with just under 40% saying it was the biggest obstacle to starting a business, while, surprisingly, it was Scotland who appeared the most confident with only 26% considering this their biggest obstacle.

With skyrocketing rents, huge multi-national corporations littering the skyline and the carnage that is London’s transport system, it’s easy to assume that the capital is a terrifying place to start a business with a mountain of obstacles to overcome. Interestingly, out of the 11 regions surveyed, London voted ‘no obstacles’ in an overwhelming manner with just under 30% voting for the answer. To put this in perspective, the UK national average came in at just a smidge under 18%. View how your region rated ‘No Obstacles’ below.

A Network of Support

One of the hardest parts of starting a business is maintaining some type of social life with friends and family. For many women, having a solid network of support that understands the commitment needed for success and will make time and support available right when you need it will be of real importance. For the UK’s female entrepreneurs, this doesn’t seem to be a real concern. Out of the women we surveyed across the UK, only 9% said that finding a support network would be a concern. In our regional breakdown the North West of England scored the highest with 14% saying that building a support network would be their biggest obstacle to starting a business. On the other end it was the East Midlands who scored the lowest with only 6% saying they would consider building a support network their biggest obstacle.